We’RE BACK, We’re JACKED, and we’re nearly all Vaxxed. 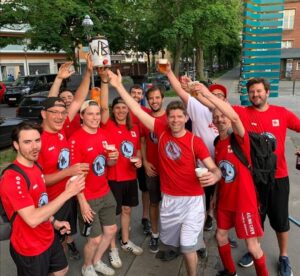 Congratulations to Rixdorf Beavers for winning the only drinkable trophy in sports. They won the Welcome Back Cup. Let’s see if they can translate this success into a league championship by summer’s end.

Well That Was Weird

Being The Greatest League in Sports comes with great responsibility.

We kept our distance, we took our shots, we followed all the rules, and we took care of each other so we could all one day meet again to hug and rejoice, and feel the ice cold sting of a clapper off an exposed hamstring so that later in the work week when we look down at the yellow-edged welt of a bone deep bruise, we can say, yes, I am alive.

Our first week back is a double header, a built-in season mini-cup much like what the football leagues try to pull off only less awesomely than us. It’s okay, they will learn, just as we will learn to love again the feeling of red hot lungs on a failed backcheck.
What’s a backcheck?

Honestly, we don’t know ourselves. What we do know is the ball hockey, streethockey, dek hockey, road apple, however it is you call it – is back at Poststadion this Saturday June 5th.

It’s been seven months since we were locked out of the stade but our experts have come up with the following rundowns of the teams on their first-ever summer season to eat hotdogs from the Greatest Trophy in Sports.

If you thought global pandemonium could stop the funnest, most moustached league in sports, well you were wrong. While Champions League, MLB, NHL, NBA, and the Olympics were each on hold, there was a while where Berlin Street Hockey was the only sports league going next to Belarussian football and Korean baseball. The season was capped off with record attendance of almost 20, obliterating the original record of the one drunk Berliner asleep in the stands last opening day. While last season is in the books, the storylines are fresh for 2020. 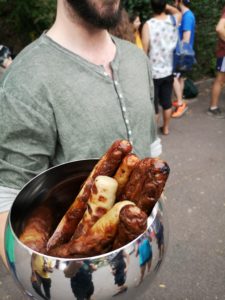 Weissensee EisBieren’s run through the semi-finals against a depleted Tempelhof and eventual capture of the elusive trophy in their inaugural* season against Rixdorf came after a trade-deadline deal which bolstered their roster with an international mix of power-forward South Africans and a two-way Italian forward. The trade in question: a spring draft pick in exchange for six hot dogs and a six pack of beer. The scandal: the hotdogs were allegedly never delivered. Weissensee steadfastly denies the accusation and argues the hotdogs were eaten, but they were nonetheless stripped of their fall draft packs as they watched other teams scoop up new talent. No one on Weissensee Eisbieren would dare have an asterisk put on their 2020 title but Hotdog-gate is the cloud that hangs over them and they’ll be defending their title along with their reputation, minus a league-leading scorer who traded in the splintered sticks of Moabit for life in the Italian countryside. Che bello!

“We know these fuckers ate the hotdogs and fucked us at the draft” said an embittered Weissensee GM about the south-side team, but Rixdorf will let the quality of their hockey speak for their reputation. There’s a Dr. Strange level hockey IQ on Rixdorf with Marvel Universe youth and speed. If they win it this year that’ll be 4 trips to the finals and 2 championships. It’s dynasty-level hockey if they pull it off, but they’ll have to address their low attendance as key players have been sidelined with upper body injuries such as altruism, unconditional love for family, and precarious employment in a time of global pandemia and economic collapse. If they choose the path of dynasty, they’ll have to ask themselves the big questions, namely, what is more important: world peace, family, and general survival as a human, or chasing the orange ball around the cold slippy floor in the dead weeks of winter in a league where playoffs is a guarantee.

Wedding’s Cinderella run last season came to a sad ending in the semi finals in a tight contest against Rixdorf before the wheels came off for them in the third period. However, Wedding was busy in the spring draft adding scoring and depth up front. Drafting a scientist only adds to their already high hockey IQ and trading for a veteran board-crashing winger will only make them, well, crashier. The Crashers are big, fast, efficient and are expected to gel in 2020 like a head of hair on prom night. There’s chatter of a return this fall of a chippy, snipey veteran from overseas and when The Finns show up there’s always the feeling a human sacrifice is about to take place.

Speaking of being busy in the draft, the 2020-2021 year is the year of the Green rebuild. They found five new faces at the draft after securing 1st overall talent in the Spring draft and their future looks good considering their past season was a covid dumpster fire. Sturdy defensive prospects were added to compliment a forward corps capable of leaving a trail of burn victims behind their rocket-fast forwards. Veteran winger Nico has installed a new desk in the left face-off circle of his startup, OneTimers.com, and plans to get some work done in his office this year. Make sure to take a drink every time you see that fist pump.

The day’s Basement Barnburner featured last year’s champion Tempelhof against Wedding Crashers, whose Cinderella post-lockdown win streak they rode on the back of a 1st round draft pick goaltender  had them with some Reno garage bookmakers as contenders to win it all, however a crash-and-burn semi-final foretold their final match as they lit fire to any chances of ending the season victorious.

They did manage to exit the basement with a strong finish in the regular season but Tempelhof will have to ask themselves the big questions as they rebuild this summer, namely, what do you do when a microscopic virus unleashed at a Wuhan wet market explodes half of your roster while detonating the global economy. 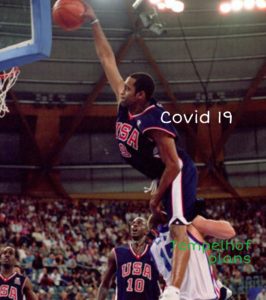 After breaking the attendance record of 1 passed-out drunk at our league opener with 2 fans coaxed into attending for the annual all-star game in near-freezing weather with the promise of free industrial glühwein, attendance for the finals smashed previous records. Fans were ecstatic. “I came to see what was more important for my husband than spending time with this family on Saturdays” said one attendee. “I came for the hotdogs” said another.

The championship game was tight until the 3rd period until Weissensee, faced with the prospect of becoming street hockey’s equivalent to the Buffalo Bills, found a second and third wind to battle past a depleted Rixdorf. “My skin was so itchy from an expired energy drink I’d taken at intermission,” reported one EisBieren player, “Mostly I was running just to take my mind off it.”

Rixdorf, who lost two leading scorers to crippling vacays to sip Barolo and Bordeaux from a boat on Lake Cuomo and a coastal beach in France respectively,

repeatedly felt the burning rejection of a freshman at a high school dance from MVP goaltender and league rookie Leon, who had ended the regular season with the league’s first ever shutout and a finals performance for the ages.

It’s on to summer camp now as team’s confront their biggest challenges: twice to the finals, will Rixdorf be street hockey’s Buffalo Bills; in Berlin’s crushing real estate market will Wedding Crashers ever move out of their basement flat in the standings; what will the Green rebuild look like, and will Eric ever get the cup removed from his face in time for Weissensee to defend its title in the 20/21 season. 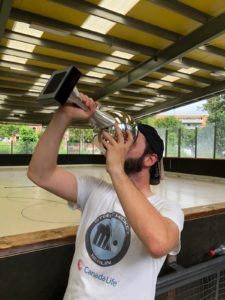 Relive the highlights of the Spring 2020 Free Agent Draft! 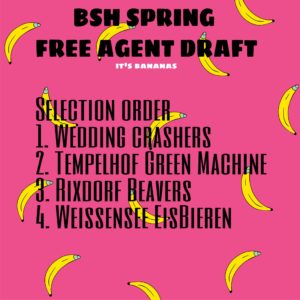 The BSH Spring Free Agent Draft is upon us. Playoffs are almost here, new joiners are among us, and it’s time to lock the rosters. With that said – teams will now be able to select new joiners based on the team’s current standings.

Here’s the latest from scouting: 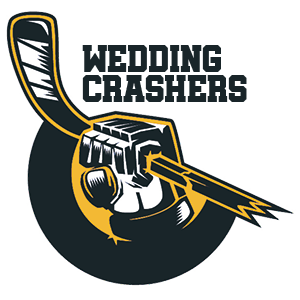 The Wedding Crashers are without a starting goalie despite their gritty two-way forward Trev climbing shirtless down from the stands after a pair of post-game Radlers to play two emergency periods for Weissensee between the pipes after Weissensee greedily tried to squeeze a second game from a rival on the hottest day of the year. The hockey IQ is high on Wedding despite sitting 4th and if Kyle and the Finns are back for the playoffs all hell could break loose on the score sheet as it did last week with the French connection bringing the heat and the muscle to their playoff race. The question for them is do they draft another high powered forward or ride their hot rookie and draft candidate Andrew who is now the league’s only undefeated netminder with a record of 1-0.

Defending champion Tempelhof could be hard pressed to defend their championship after losing not only the league’s leading scorer but also it’s fastest player who were both repatriated after a global pandemic not seen since the hottest stars in pop music were Claude Debussy and Gustav Mahler. They’re solid in nets with the league’s best goaltending duo including Lars the Wall, and draft candidate Rado was lighting up the score sheet for them last week. 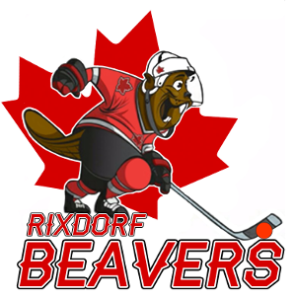 Rixdorf lit up the scoreboard in their first game back and chemistry and hockey IQ is not a problem. They’re smart and fast and may look to get smarter and faster. Their weakness may be overconfidence expressed in overzealous dangling so if they don’t draft a player it’s possible they select a few self-help books on restraint and self-control from a discount bin at their local bookstore. Remember to shop local everyone.

Weissensee’s best defense is their highlight reel offense but they’ve been plagued by injuries, a subsequently thinned out bench, and some literal ageing. Their in the market for all the muscle and hustle that could help them compliment their 1st place finish with their first ever title.